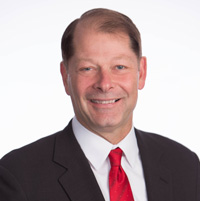 David earned a B.S.B.A. in Finance from Drake University. He earned his CFP® certification in 1982 and in 2008 served as Chairman of the Board of Directors for the U.S.A. Certified Financial Planner Board of Standards Inc. In 1987 he received the Chartered Financial Analyst® certification and earned the Certified Kingdom Advisor® designation in 2017.

He has pursued his governing board passion by being on the National Boards of the Financial Planning Association and Certified Financial Planners Board of Standards. While he was Chairman of the CFP Board in 2008, he traveled to other CFP countries to make sure the standards were consistent worldwide. David spoke at the FPA of Singapore’s conference, the CFP Professional International Forum in Christchurch, New Zealand and China’s first Financial Planning Conference in Shanghai.

David currently serves on the Board of Directors for the National Endowment for Financial Education® (NEFE®) where he is in his second three-year term and served as Chairman in 2018.